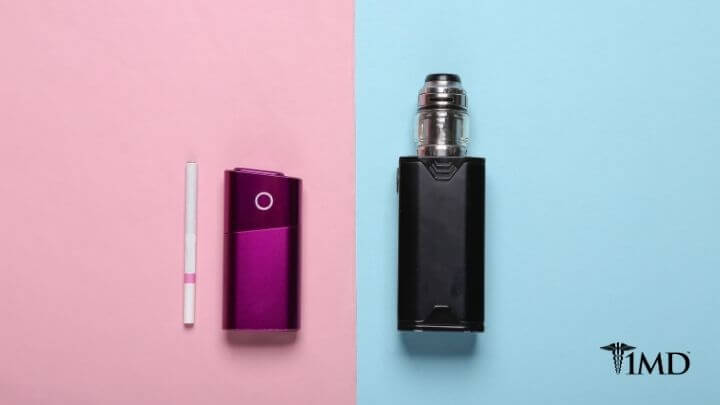 Vaping devices, such as e-cigarettes, hit the U.S. market in 2007. Because vaping is still so new, the health effects have not been fully studied.

Vaping is marketed, and perceived, as better for your health than traditional smoking. There is significant evidence to support this claim, but that does not mean that vaping comes without potential health risks.

A new study, in fact, has found evidence that contradicts much of what may have been previously assumed about how unhealthy vaping may actually be.

E-cigarettes, vape pens, and advanced personal vaporizers (mods) are all examples of types of vaping devices. A battery powers a heating component, which turns the e-liquid into an aerosol that is then inhaled into the lungs.

Vaping is when you inhale and exhale the aerosol produced by an e-cigarette or similar device. The aerosol resembles water vapor, hence the term “vape.”

E-liquid or e-juice is typically made up of a propylene glycol or vegetable glycerin-based liquid, nicotine, flavoring, and other chemicals and metals.

The aerosol “vapor” that is produced by the heating component of a vaping device and inhaled through the mouthpiece is actually made up of tiny particles that do contain toxic chemicals. The aerosol can contain nicotine, flavorings that can cause serious health problems, cancer-causing chemicals, and heavy metals (e.g. nickel, tin, and lead). 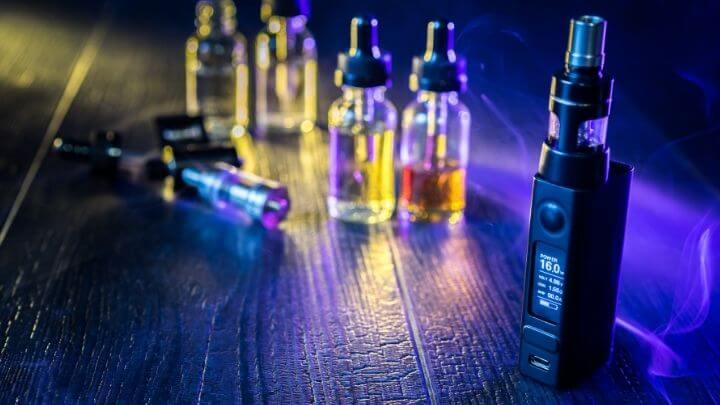 While vaping has been touted as a safer alternative to smoking, there are still toxic, unregulated substances involved.

It is common knowledge that smoking cigarettes or other tobacco products is not conducive to living a long, healthy life.

| Related: Top 12 Cancer-Causing Foods You Should Avoid at All Costs |

Every year, more than 480,000 people die from tobacco use and secondhand smoke. And that’s just in the U.S.

It’s not surprising, especially when you look at the ingredients that are commonly found in cigarettes. An average cigarette contains 600 ingredients, which create more than 7,000 chemicals when burned.

Some of the common ingredients in cigarettes and their other uses include: 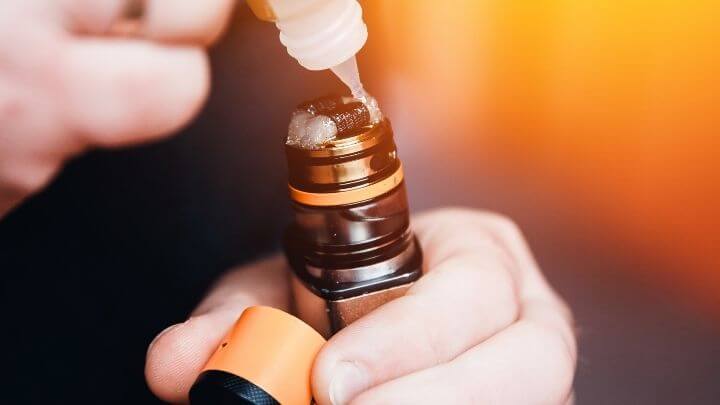 Smoking harms almost every major organ in your body and is directly responsible for 90% of lung cancer deaths and 80% of deaths caused by chronic obstructive pulmonary disease (COPD), including emphysema and chronic bronchitis.

So, Is Vaping Better?

While the ingredients and harmful chemicals found in the e-liquid used in vaping cartridges are fewer than in a cigarette, e-liquids still contain some things to watch out for.

E-cigarette manufacturers have only been required to register with the FDA since 2016, and they’ve had two additional years to submit an application to remain in the marketplace.

For the last two years, even though e-cigarettes have been brought under FDA regulations, products like e-liquids have remained in the marketplace for which it is difficult to find the listing of chemicals.

The U.S. Surgeon General has concluded that e-cigarettes do include harmful ingredients, such as nicotine and other harmful chemicals.

Nicotine is not only addictive, but it can harm a fetus during pregnancy, cause preterm delivery, low birth weight, stillbirth, and sudden infant death syndrome.

Exposure to nicotine can also harm brain development in adolescents and young adults, causing cognitive and behavioral issues, such as negative effects on memory and attention. 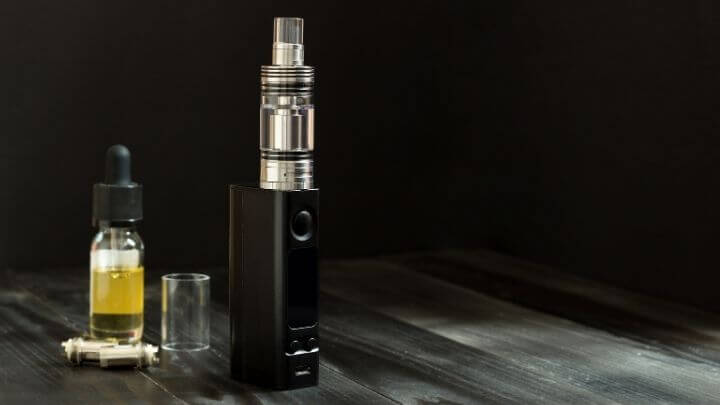 Even e-cigarettes that claim to be nicotine-free have been found to have traces of nicotine in them. E-liquid has also been found to contain cancer-causing chemicals such as formaldehyde.

Flavorings are another ingredient in e-liquid that raises cause for concern. Flavorings not only lower the perception of potential harm from e-cigarettes, but they also draw in younger users.

Flavors that are deemed safe for food by the American Food and Drug Administration are not cleared to be safe for inhalation.

Diacetyl is a chemical with a buttery flavor that is used in some e-liquids. When inhaled, it can cause a serious, irreversible lung condition known commonly as popcorn lung.

Popcorn lung is the scarring of the tiny air sacs in the lungs, which results in the constriction of airways. Popcorn lung symptoms include shortness of breath, coughing, and wheezing, similar to people suffering from chronic obstructive pulmonary disease.

Vaping contains, as far as is currently known, fewer harmful chemicals than cigarettes do, not to mention you’re not inhaling smoke when you vape.

They are safer than smoking cigarettes, but that doesn’t mean that they’re safe.

The known dangers of nicotine use and the inhalation of chemicals found in e-cigarettes aside, new research has shown a possible link between e-cigarettes and cancer. 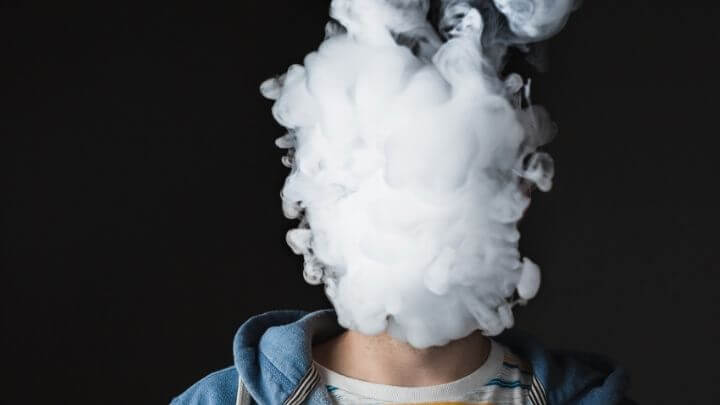 A study released in January from the New York University School of Medicine exposed mice to e-cigarette vapor for 12 weeks. This exposure equalled 10 years of light e-cigarette usage by a human.

They concluded that e-cigarette vapor can cause damage to DNA as well as the lungs, bladder, and heart. This increases the individual’s chance of developing cancer or heart disease.

E-cigarettes present dangers other than the toxicity of the inhaled aerosol. Defective e-cigarette batteries, for example, have caused fires and explosions, sometimes resulting in serious injury.

Due to exposure to high levels of nicotine, children and adults alike have been poisoned by swallowing, breathing, or absorbing e-cigarette liquid through their skin or eyes.

Another danger of vaping is that, since it is seen as less harmful than smoking cigarettes, more young people are taking up vaping. In a survey conducted in 2016, 11.3% of high school students and 4.3% of middle school students reported having used an e-cigarette in the previous 30 days.

In a study done in 2014, 63.3% of youth tobacco users reported having used a flavored e-cigarette in the previous 30 days.

The e-liquid used in vaporizers, such as e-cigarettes, contains some of the same harmful chemicals and substances as cigarettes, and a recent study has shown a possible link between vaping and cancer.

More research is needed in order to fully understand the dangers and long-term health effects of vaping.

READ NEXT>>> Diet Drinks Triple Your Risk of Stroke and Dementia