Jim Carrey: His Depression Was No Laughing Matter | 1MD Nutrition™

Jim Carrey: His Depression Was No Laughing Matter 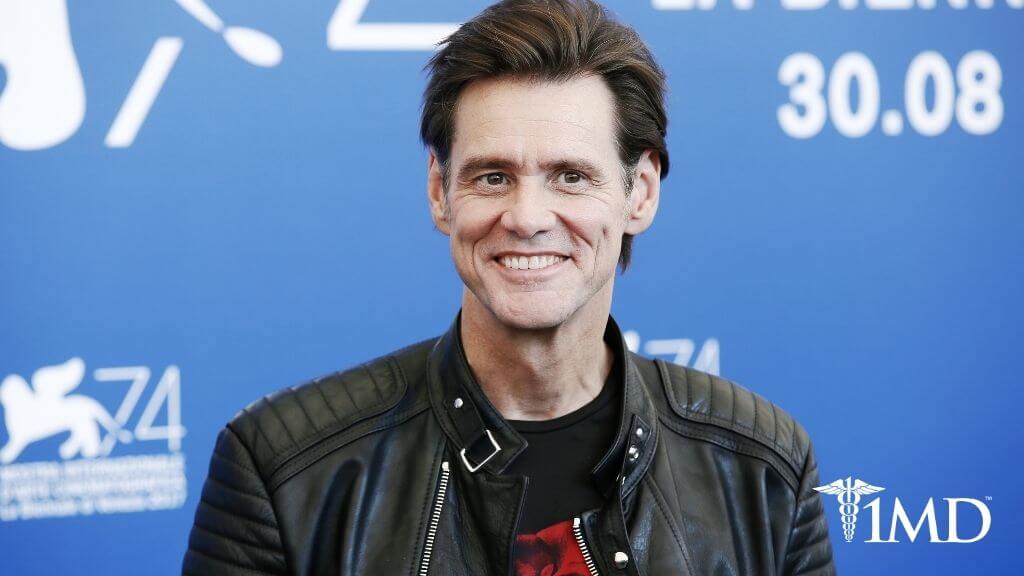 When funny man Jim Carrey is on the screen, we laugh away our troubles. Often these celebrities play their roles so well that we forget that they are real people.

More than just the characters he plays, Jim Carrey has dealt with his share of struggles because he lives in the same world that we do.

Anyone can suffer from depression. It is an affliction affecting all races, classes, and genders. Carrey’s battle with depression shows just how dark Hollywood can be and that what we see on the screen is nothing like reality.

With top-notch acting skills and comedic performances in Dumb and Dumber, Liar Liar, The Truman Show, and Man on the Moon, it was hard not to fall in love with Jim Carrey. He can make you laugh with a single gesture, facial expression, or silly phrase.

As one of the top-earning actors in Hollywood and a genius in the comedy genre, Carrey seemed to be living on cloud nine.

Underneath the smiles and laughs. Carrey struggled with depression for a substantial portion of his career.

This debilitating mental disease can interfere with your physical health and quality of life. The real danger is that people can suffer from this disease without anybody knowing.

We laughed each time Carrey’s face came across the screen, but as soon as the lights went down, and cameras were off, his world fell into darkness. And nobody knew.

How Depression Can Kill in Secret

Carrey recently opened up about his battle with depression in the hopes of highlighting the importance of understanding and recognizing the disease. Despite reaching out for treatment and receiving medication, he admits that the struggle is ongoing.

Describing himself as a “sometimes happy” person, he says, “...now, when the rain comes, it rains, but it doesn't stay. It doesn't stay long enough to immerse me and drown me anymore.”

The causes of Carrey’s depression were never disclosed, but given what is known about the disease, it is likely that environmental factors and pressures, lifestyle choices, finances, and possible childhood difficulties could have lead to the development of a depressive disorder.

Many comedic actors have admitted that comedy is a defense mechanism to cover past traumas, so the potential for skeletons in the closet is very real.

Carrey was also diagnosed with ADHD, which goes hand-in-hand with depression. The slow brainwave patterns of ADHD patients also cause mood-destabilizing effects.

Not only did Carrey feel sadness and despair, but he was overwhelmed at times with immense stress, which his career only compounded. He reported frequent mood swings and anger before beginning medications, and any relationship, professional or personal, was strained.

The emotional roller coaster Carrey went through is the same for most people diagnosed with depression. Because we put celebrities on pedestals, we forget that they face real problems just like us.

Carrey’s story is a shining example of how easy it is to overlook a serious disease. It highlights the importance of identifying signs and seeking treatment.

Thankfully, he sought help before it was too late, something many people with depression do not feel they can do.

Taking the Mask Off

Overcoming depression wasn’t easy for Carrey, as it is not easy for anybody. There are many factors that go into successfully beating depression. And the struggle is often ongoing.

Carrey found healing through accepting the disease, finding spirituality, making lifestyle changes, and perceptual changes. While he did not benefit from medications, some people do.

The truth is that every person is affected differently by depression, so the way through it may not be exactly the same as someone else.

What matters is seeking help and wanting to fight. If you are feeling depressed, you should seek the help and advice of your doctor before trying to treat yourself.

That said, medications may not always be a miracle cure. Like Carrey, some people find that antidepressant medications are not helpful. It is sometimes even possible that the drugs can make depression worse.

That is why it is important to know about alternative options, specifically those that are natural and less likely to come with negative side effects.

The spice turmeric has been successfully linked to the treatment of depression, and is able to provide help in a number of ways. These include:

There is a cyclical relationship between inflammation and depression. Inflammation can be triggered by poor sleep, bad diet, and physical inactivity, which may all be part of a depressed person’s routine.

Curcumin, the main compound of turmeric, possesses powerful anti-inflammatory properties which allow it to keep inflammation under control. While there still may be other biological factors contributing to depression, daily turmeric treatment can keep the inflammation at bay, which is one less thing for you to battle.

Poor diet, which is associated with depression, can cause the oxidative stress that kills healthy cells and tissues. Oxidative stress is linked to depression through the damage it causes to the brain, but it can be treated with a boost in antioxidant levels.

By increasing intake of antioxidant-rich foods, such as turmeric, your body’s ability to scavenge the free radicals causing depression improves.

Your brain relies on the presence of specific proteins known as neurotrophins, such as BDNF. Studies have found that the brains of depressed patients show significantly lower levels of this protein as compared to those without depression.

Turmeric acts as a natural antidepressant by increasing the levels of these proteins in the brain to make sure balance and optimal brain health is maintained.

The bacteria that live in your gut are responsible for triggering the release of 90 percent of your serotonin levels. This means that an unhappy gut can also cause an unhappy brain.

Imbalances in your gut microbiome have been linked to anxiety disorders as well as depression. By relieving your intestines of any inflammation, the gut bacteria can maintain a positive balance and therefore reduce depressive symptoms.

Jim Carrey’s story gives hope to people battling this disease, showing that it doesn’t matter who you are or how much money you have. Depression is real, and it can take your life away.

The more we understand it, the better chances we have of fighting it and protecting those we love. A smile can hide so much, as we can never truly know what another person is going through.

The key is to acknowledge it, accept it, and get help. Covering it with laughter will only cause more pain.