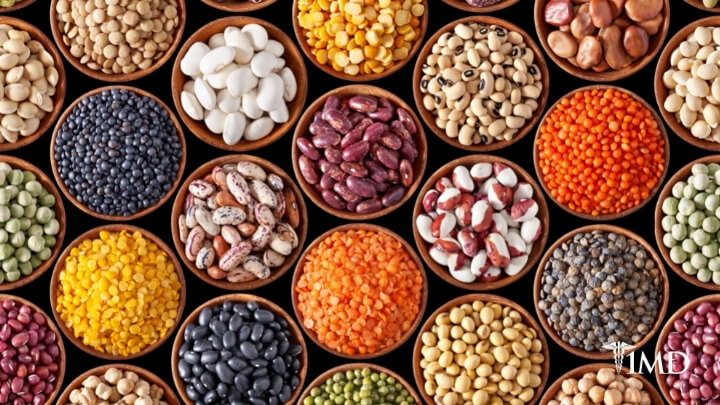 As if we don’t have enough to worry about, the latest condition emerging causes us even more stress. Eco-anxiety is a real condition that is defined as the dread and helplessness associated with watching the slow and irreversible impacts of climate change. This, in turn, causes us to worry about our future, as well as the future of our children and future generations.

While there is no formal diagnosis for this new anxiety, it is becoming more apparent in response to very real stimuli, as are the deleterious effects on the body. According to a Gallup poll, 36 percent of Americans report to worrying “a great deal” about global warming and 35 percent believe climate change will “pose a serious threat” to them or to their way of life in their lifetime.

The only remedy is to know what can be done to mitigate environmental degradation from within. The answer lies in environmental nutrition, a new field that is focused on developing food systems that balance human health and sustainability.

Research has been conducted on the potential to maximize the impacts of individuals.The focus has been solely on a single dietary change. By changing just one food in your diet, scientists believe a great change and improvement can be made.

Eating beans instead of beef can be the way forward and the solution to eco-anxiety. By switching from beef to beans, scientists estimate that the United States could come close to meeting the 2020 greenhouse-gas emission goals that were set forth by President Obama in 2009.

| Related: Should You Try a Pescatarian Diet? |

People will be able to continue eating chicken and pork, eggs and cheese but this minor switch of one item can achieve between 46 and 47 percent of the reductions needed to meet that target. Nothing about the energy infrastructure and transportation system needs to change; we simply need a small dietary adjustment to fix the current environmental crisis. There is much skepticism about the idea, but scientists confirm that this is only a result of a lack of understanding. 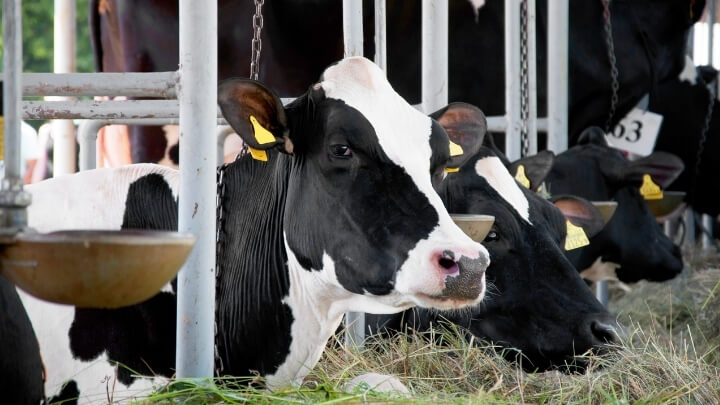 There have been previous analyses regarding the environmental impacts of veganism and vegetarianism but this new idea is a novel one in that a person does not have to maintain complete dedication to see a change.

A relatively small and simple food substitution can be the most powerful change a person can make in terms of potential contributions to the environment. It can be more beneficial and important than downsizing a car or being vigilant about turning off lights and definitely more influential than quitting showers.

What's the Deal with Beef?

It is important in this new movement to understand why the climate impact of beef alone is so significant. By taking a closer look at farms that breed cattle, you can see that the growth and fattening of 38,000 cattle requires feeding daily of close to 900 metric tons of beans. The beans will be eaten by cows, and the cows convert beans to meat for humans to eat.

During this entire process, the cows will consume more calories in beans than they actually yield in meat. What this means is that a great deal of clear cutting of forests is done to feed cattle, much more than would be necessary of the beans we gave to the cattle were eaten by people instead. Most people are not aware of this very inefficient process so the knowledge is important in getting this new movement going.

Fewer plant crops needed to feed cattle would lead to less land degradation and deforestation. If we decided to replace beef with beans we would free up close to 42 percent of the country’s crop land.  This is a change that the country and the climate needs.  There is no need for this to be policy driven, it can start with individuals. By seeing the impact you can make, you can feel positive and empowered about the difference your small change makes to the bigger picture. 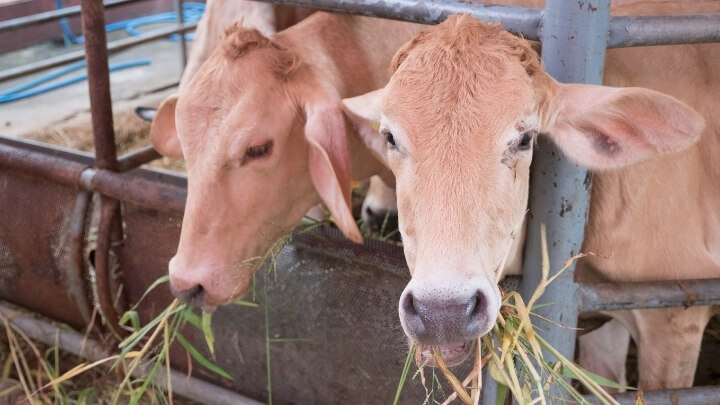 The environmental impact of feeding livestock isn’t the only driver of climate change. Cows contribute methane gas to the environment when they pass intestinal gas through burps and passed flatulence.

As ruminants, cows eat hard-to-digest plants such as grasses. In order to digest, their digestive systems have evolved to include four chambers. Chewed food begins the digestion in the first two chambers before it’s regurgitated and chewed again, moving back to the stomach and intestines to complete digestion.

Microbes in the digestive tract support the breakdown of food and one of these microbes produces methane, the same gas we use as natural gas. Methane, about 85 times more powerful than carbon dioxide, helps to trap heat in the atmosphere, which contributes to climate change.

The storage of manure is also a problem. Instead of being used as fertilizer, manure is often stored in pits, which encourages bacteria that is also a source of methane.

Can Meatless Mondays Make a Difference?

According to a study at the University of Oxford that looked at four different diet scenarios, a global scale adoption of veganism could potentially decrease agriculture-related carbon emissions anywhere from 29 to 70 percent. The impact would be greatest for non-industrial countries

The international food system is the source of over 25 percent of greenhouse gas emissions and livestock contribute to about 80 % of this impact. Numerous studies have concluded that a large-scale conversion to plant-based diets could be monumental in preventing a 2 degree rise in global temperature over the next decades. 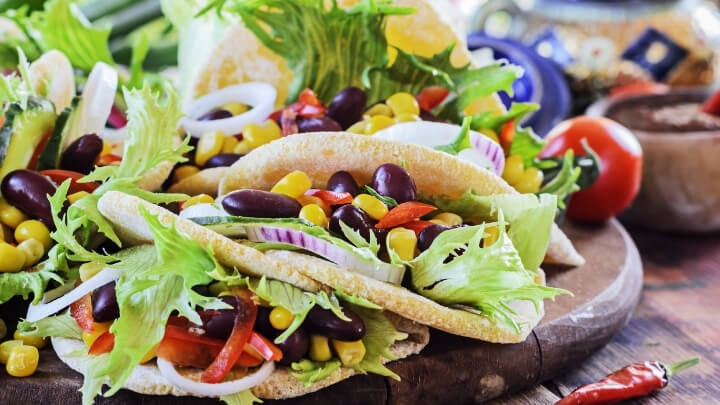 Replacing beef with beans offers significant climate change mitigation, as well as other environmental benefits.The beans-for-beef scenario illustrates the high potential of animal to plant food shifts. This just might be what our bodies, land and environment need. One small step for mankind means one giant step for the planet.

In addition to the already well-documented benefits for a plant-based diet, the beans for beef switch can bring empowerment and reprieve. By looking at the worst spot in the food chain for greenhouse gas emissions, we see an opening for change.

For those concerned that beans just cannot be as tasty as beef, there are a number of ways that beans can be included in the diet to replace beef. You get delicious and healthy meals, all while saving the climate. When you decide to swap the beef out and add the beans, try these nutritious and environmentally friendly meals:

♦ Meatless meatloaf made with beans and a mushroom gravy

♦ Lasagna made with beans instead of ground beef 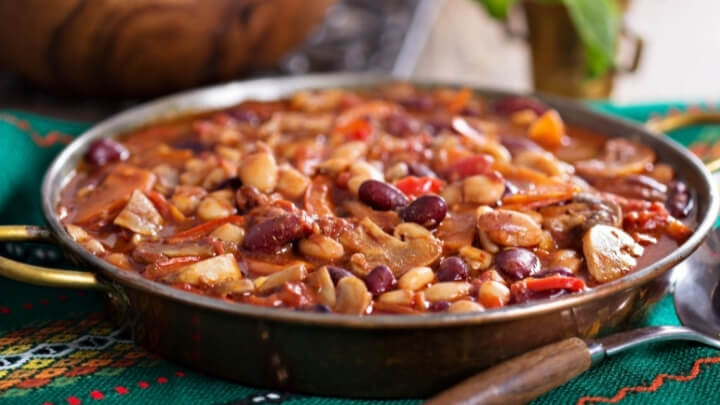 The current international food system is responsible for about 25 percent of greenhouse emissions, a significant contributor to climate change. Specifically, the raising of livestock such as cattle is responsible for up to 80 percent of this impact through numerous factors, including the release of methane gas through digestive flatulence and the bacterial decomposition of manure.

The raising of livestock for food is also an inefficient use of resources, as land must be cleared to grow animal feed crops, as well as to support cattle. This leads to deforestation and other environmental issues. j

The large scale conversion to plant-based diets could significantly impact climate change but even replacing beef with beans could have an impact for the environment.