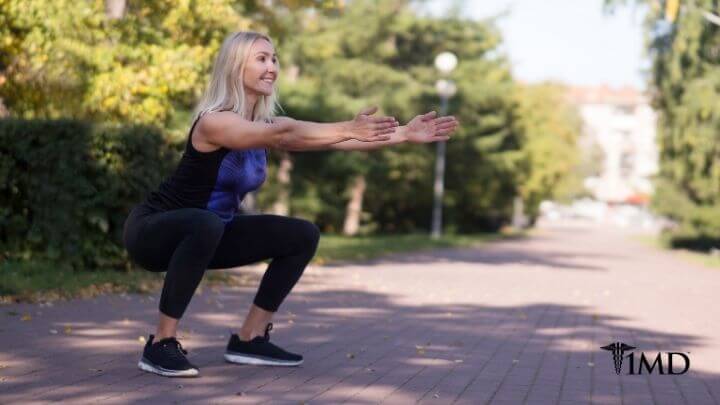 If you squatted down as low as you could go, would you be on your toes or would your heels be touching the ground?

If you’ve grown up in the West, your answer is probably the former.

Also known as the “Asian squat” due to its prevalence in Asian countries, the deep squat is a more stable, more comfortable (once you get the hang of it) position than the common heels-up squat.

The Details of the Deep Squat

It would seem that some people can just do a deep squat with their heels on the ground, and some people just can’t. If you’re one of those who can’t, it may seem impossible, and perhaps useless, though there are reasons as to why it is so popular amongst people who can do it.

| Related: Sleeping on Your Left Can Benefit Your Health |

The deep squat is very stable, more so than standing, due to the low center of gravity. It provides a comfortable resting position and alternative to sitting, handy when there isn’t a convenient (or, let’s face it, clean) place to sit.

Can’t do it? Your ankle flexibility is probably to blame, according to a 2009 study done in Japan, which found that a deep squat is an effective way to measure ankle joint dorsiflexion flexibility.

Babies routinely stick their toes in their mouths and contort themselves into impossible positions. You might see this superior flexibility expressed when children pop down into a deep squat with no problem.

In relation to kids having more flexible ankles than adults, Bryan Ausinheiler, a physical therapist in California and deep squat enthusiast, said: “I measured my daughter’s ankle flexibility when she was one day old. She has 70 degrees of ankle dorsiflexion! Normal in the West is like 30.”

Want to do it? You can increase your ankle flexibility through stretches and exercises so that you can achieve your deep squatting goals. Like with any exercise or increase in flexibility, be patient and persistent. A lot of us have lost our youthful ability to squat low to the ground, and it will take time to regain the skill.

Which isn’t to say that all adults have problems with the deep squat. Especially in Asian countries, adults utilize the deep squat to great effect while taking a break, smoking, eating, or doing a great variety of things.

This includes using the facilities.

Practically speaking, you won’t have much use for the deep squat in the United States, other than when you’re on a mission to make your glutes pop or you’re trying to impress your Asian friends.

If you travel abroad, however, the deep squat becomes a rather handy skill to have.

Though Western toilets are becoming more widely available in China, squat toilets still make up the majority of bathroom hardware.

Nothing can put a damper on an exciting international trip like having problems going to the bathroom. We’re not talking about issues with bowel movements, though that’s no fun, either.

Your first reaction to a squat toilet might be, “What is it and how do I use it?”

Squat toilets are essentially toilet bowls that are sunk into the floor rather than at chair-level. Grooves to either side indicate where your feet should go when you do your business.

When you use a squat toilet, it really is best to keep your feet flat on the ground. If you rise up onto your toes, accurate aiming might become more difficult, especially for the ladies.

These types of toilets are generally considered to be more hygienic than seated toilets due to the fact that your skin isn’t touching its surface. This, of course, is provided that you can effectively perform the deep squat while keeping your balance.

For more tips on using a squat toilet in China, check this out.

Squat toilets can also be found elsewhere in the world, beyond Asian countries such as Japan, Korea, India, and Thailand.

In Southern and Eastern Europe, like in France or Italy, squat toilets are often preferred at public restrooms because they are easier to clean and more hygienic, though a seated toilet is commonly used at home.

The Deep Squat for Weightlifting

You may be more familiar with the deep squat in terms of weightlifting, especially since CrossFit has become so popular.

When weightlifting, a deep squat where your hip crease goes below your knees may be more effective than traditional parallel squats. The greater range of motion engages more muscles, even ones in your core and upper body to help stabilize.

A study has shown that a deep squat may even increase knee stability, as opposed to being bad for your knees, as some people think.

That being said, you should take extra care when performing deep squats, as there is greater risk for injury.

Back to the Toilet

While you’d be hard-pressed to find any squat toilets in the United States, stools such as the Squatty Potty are becoming more and more common, which boosts your feet into a squatting position.

This can reduce the amount of straining required when you’re having trouble going.

That’s because the squat creates a more optimal angle for the rectum, opening up the rectal canal. This change makes it easier to have bowel movements, as suggested in this study.

Less straining could equal fewer hemorrhoids and the better angle could help alleviate constipation, though if you’re constipated there are probably several other factors at play, such as diet.

Yes, squatting while going to the bathroom does create a better angle and can help things flow more easily, but not everyone needs the extra help.

The deep squat is a cultural phenomenon that is very underutilized in the United States outside the world of protein shakes and barbells.

Elsewhere in the world, the deep squat is used as a common, comfortable alternative to sitting, especially in Asia, where squatting toilets are more common than seated ones.

READ NEXT >>> 12 Things Your Poop Says About Health