Study: Bacteria In Food May Lead To Heart Disease And Stroke | 1MD Nutrition™

Study: Bacteria In Food May Lead To Heart Disease And Stroke 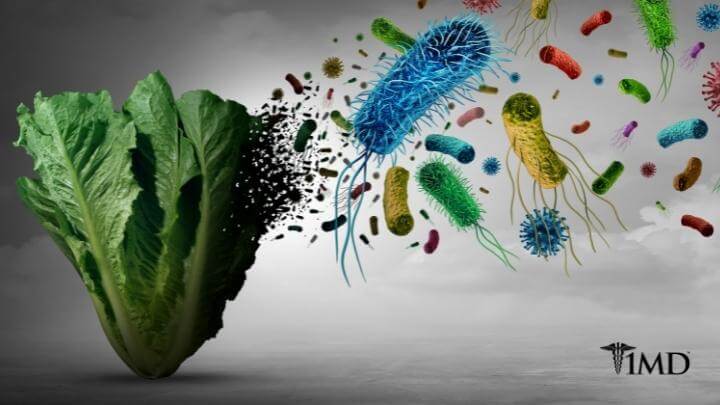 As it is today, heart disease is the number one killer of people in the modern world. This disease affects people from all walks of life. There is no gender, race, or ethnic group that is safe from heart disease.

Researchers are looking to find out what causes heart disease in the world and why it affects so many people. Researchers have discovered that unhealthy gut bacteria may a leading cause of heart disease. This bacteria is found in common foods that people eat every day, such as that found in meat and eggs.

The Risk Present in Meat and Eggs

According to recent studies, the United States has a much higher rate of heart disease due to the daily intake of choline. This is an essential nutrient but if a person does not get the correct amount of it in their diet this can increase their risk of developing heart disease.

If a person gets too little of an amount of choline in their diet it can lead to heart disease. A person needs to make sure they get enough of this compound in order to stay healthy. It can even put a person at an increased risk for cancer and other health conditions.

Choline is found in large amounts in certain foods. These foods include red meat, nuts, wheat germs, the yolk of the egg, and liver. There is a large amount of choline that is found in these foods.

If a person increases their daily intake of choline they will change the levels of Trimethylamine N-oxide in their diet. This will change the function of their blood platelets and put the body at risk for developing heart disease.

Research has found other effects that choline may have on the body. It was discovered that choline has an effect on the bacteria that is found in the gut.

While some of this bacteria is needed for digestion, there can be harmful effects from choline. Choline may turn this bacteria into a compound that will affect the blood and the flow of the blood. The blood may become sticky due to choline. This will then make the blood prone to clotting. The clotting of blood, especially in the area of the heart, can cause a person to have a heart attack or even a stroke. This can also lead to heart disease.

There has been significant scientific research conducted with choline and the risk a person has for developing heart disease.

Dr. Stanley Hazen from Cleveland Clinics and his research team conducted a study of choline on the body.

The study followed 18 people that volunteered to be part of it. Eight of these people followed a vegetarian or a vegan diet. Ten of the people in this study regularly ate meat, eggs, and dairy products.

After one month’s time, the blood levels of the participants were checked. The researchers were looking for the TMAO in the blood. They found that it rose 10 fold after using the supplement.

This meant that the blood was more likely to form clots and the functions of the platelets were affected. These platelets are the structures that help the blood clot. The TMAO did make the platelets sticky and this affected the way in which clotting occurred.

As the levels of choline increased in the body, the TMAO levels increased as well. This changed the way in which the platelets operated in the body. People that followed the vegetarian or the vegan diets had a lower level of choline at the beginning of the study. Their levels were still much lower even after they were given the choline supplements.

There are foods that may cause the TMAO levels to rise in the body and increase the risk for the blood to form clots. There are certain diets that were found to reduce the level of TMAO in the body. These diets are the vegetarian and the Mediterranean diets.

While the study did not last long enough to determine if the participants were going to develop heart disease the study did reveal some other information. Animal products increased the levels of TMAO in the body which was shown to be one of the developing factors of heart disease.

The study shows that people have been eating excessive amount of choline through animal products and have caused an increase of TMAO levels in the body. These levels cause the clumping of the blood platelets which is a risk for heart disease and other serious health conditions.

Reducing the Risk of Disease

There are some things that a person can do to reduce the risk they have of developing heart disease. For one, a person should include more fruits and vegetables into their diet.

Some researchers suggest that taking an aspirin daily can reduce the risk of the blood clothing. Aspirin has been said to reduce the work with the gut bacterial and keep the levels stable.

A person should make their food choices wisely. For example a large egg will contain 125 mg of choline. Keep this in consideration the next time you plan a grocery trip.

Healthy gut bacteria is very important to the body. This bacteria is needed for digestion and helps the body metabolize food. It is important to keep the levels of bacteria in check.
While there are a number of probotics on the market many of the cheapest ones have no scientific research to back up any of their claims. A person should watch what they eat to make sure that they are getting everything the body needs to stay healthy.