A lot of people don't know that May is also known as Skin Cancer Awareness Month. Melanoma Monday is all about the very worst form of skin cancer. And as with most cancers, if people spot melanoma signs early enough, they might be able to stop it.

However, a lot of people don't pay enough attention to their skin and they might fail to notice such potentially cancerous areas until it's too late to do anything about it.

People who already have moles should make sure that they know them well. Lots of people have completely benign moles on their bodies. However, if those moles start changing in almost any way, it might be time to consult with a physician.

Moles that bleed, itch, or scap could easily progress into newer and less benign stages. It's extremely important to check moles for details related to their diameter, asymmetry, color, and border. However, patients should ultimately monitor moles for any changes, since this is what can signify development of a cancerous spot.

The Severity of Melanoma

There are many reasons why melanoma is particularly dangerous, even among cancers. The fact that cancerous melanoma cells can turn into full-blown tumors so rapidly is the main factor influencing the overall severity of melanoma issues.

Ultimately, it's the cancers that spread and progress quickly that are particularly dangerous. Once spotted, they give doctors very little time to intervene during the less aggressive stages. Pancreatic cancer is similar in this regard, and it has one of the highest death rates of any type of cancer. Paying attention to this saves lives.

However, one of the other reasons why melanoma is so horribly dangerous is that
a lot of people just don't realize that they have it until it's too late. Since melanoma progresses so quickly, this is an even bigger problem. People rarely check the skin on their entire bodies when they look for potentially cancerous spots. A lot of people don't even perform these sorts of skin checks regularly. They should.

Some people are under the impression that because melanoma is so deadly, that it must be rare. It isn't. There's a notion that rare cancers are the worst, and that this correlation works both ways. In fact, in 2013 alone, there were 72,000+ American melanoma patients. Melanoma is actually sixth on the list of the top ten most common cancers in American men and women. That's an unfriendly statistic.

In 2013, a total of 9,394 individuals lost their lives to melanoma. Interestingly enough, two thirds of the melanoma victims were men. It's well known that men have a tendency to go to the doctor less often than women, often regardless of their income level. Men are often less likely to perform skin checks and similar types of bodily maintenance routines. This cultural tendency might explain
why men accounted for the majority of melanoma deaths reported.

It is possible for people to develop cancerous spots on the eyelids, on the scalp, on the palms of the hand, in the cheeks, around the anus, in the nasal cavity, in the vulva area, on the soles of the feet, behind the ears, and between the toes and fingers. It's even possible to get melanoma in the nail area, and it often manifests itself in the form of a long dark streak. Shockingly enough, people can even get melanoma of the eye, and it is often characterized by pronounced vision problems. 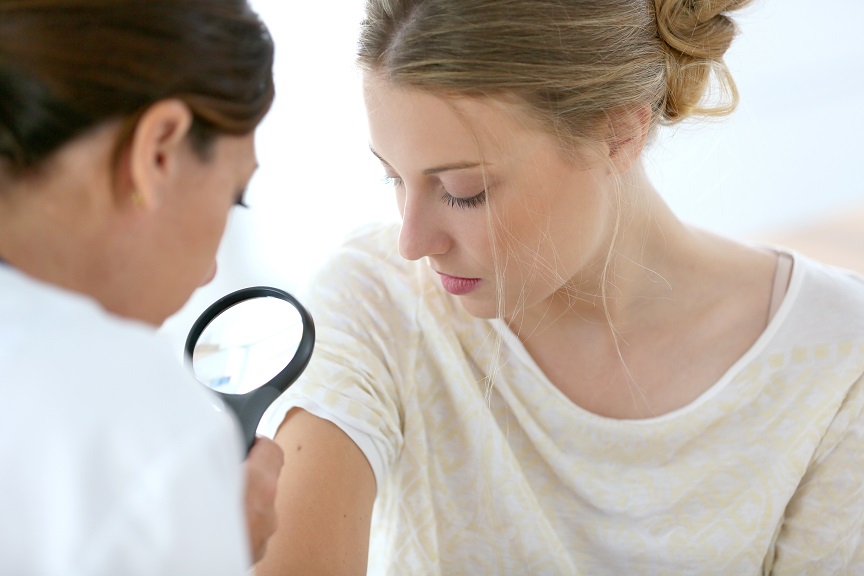 Some people don't think to do skin checks in those areas, or they think that it's not possible to get skin cancer there. While it's certainly much more common to get skin cancer in common places, it's best to inspect the entire body for spots that could turn cancerous. Skin checking is a hugely underrated health routine.

There are plenty of people who have lots of moles on their bodies. A mole that seems to be an anomaly in any way is one that's worth watching. If the mole looks different from the others, then it might be dangerous. Similarly, if it's the only mole in an otherwise blank area or if it's new, it might be worth checking out. Some new moles are perfectly benign. Older moles are not necessarily harmless either, since moles that people had at age six can become cancerous at age forty-six. Changes and anomalies can help point people in the direction of burgeoning skin cancer.

People might try to take action against melanoma by getting a mole removed in advance, which is a good idea. However, if the area around the scar starts to change or if there is new pigmentation, that might be a sign that there is something else wrong. There might be pain or bumps in the area as well,
and these are warning signs that there might have been a problem in the area.

Skin cancers can be particularly insidious because they might resemble scabs, sores, or zits, and you might not notice. However, they will differ from normal pimples, scabs, and sores because they won't have pus or other signs of an infection. People should pay attention to strange areas of the skin that never
seem to improve. These could be huge indicators of a potentially new problem.

There Is Hope For Melanoma Sufferers

The first thing that people should know about melanoma is that it is still possible to survive after getting a melanoma diagnosis. People who catch it early enough still have a chance. However, it is possible that soon enough, melanoma will become significantly less serious. Only through awareness can we defeat this condition.

University of Iowa researchers have managed to find two antibodies that might be able to stop cancerous melanoma cells from coalescing into tumors in the first place. These antibodies work just as well with breast cancer, which is another potentially deadly form of cancer that claims many lives every year. Administering these antibodies in the form of (a) new drug(s) might be able to save the lives of countless cancer patients. For this reason, research is moving full speed ahead.

The future does look bright for cancer research. However, in the meantime, people should try to prevent the development of skin cancer in the first place through constant screening of themselves and loved ones for possible cancerous areas.

People will often try to ward off cancer with the right diet and nutrition plan. When it comes to skin cancer and wellness, avoiding the sun is the most important thing.

Eating healthy food and maintaining healthy cholesterol levels is always useful too. However, defending the body against melanoma isn't just a matter of reading the ingredients on food labels. People who wear a lot of sunscreen and who avoid the sun and all tanning beds as a matter of course will reduce their risk of skin cancer and melanoma. Being aware and checking often is the path to reduced risk overall.