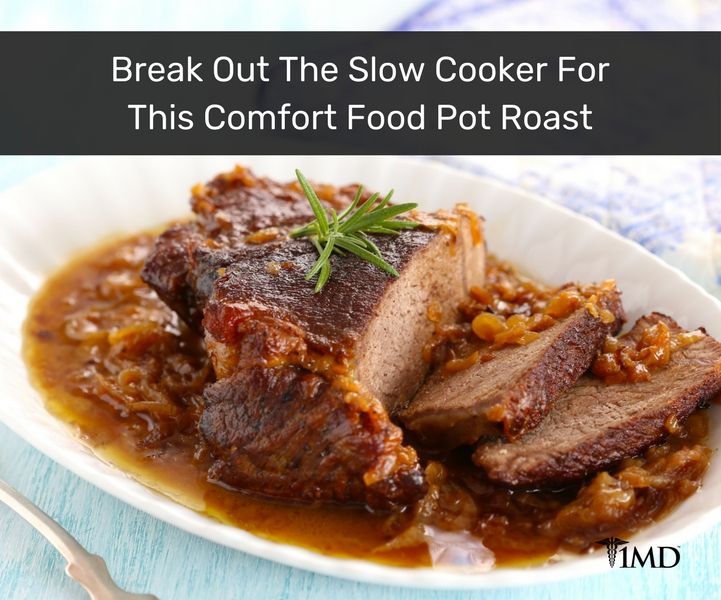 How often do you wish a home-cooked meal could appear in your kitchen after nights of take-out or pizza delivery? Take your slow-cooker out of storage to have a hearty meal awaiting at the end of the day.

Inventor Irving Nachumsohn received a patent for the slow cooker, which he had innovated to prepare a traditional stew eaten by Eastern European Jews on Shabbat when they were forbidden from cooking. Instead, they would bring pots of the stew to a bakery to cook slowly in the heat from the ovens.

The popularity of slow cookers escalated during the 1970s when women started to enter the workforce in higher numbers. In 2014, 4.4 million crockpots were sold in the United States. Today, many slow cooker recipes feature whole foods in place of the processed soup mixes of the past.

How Does A Slow Cooker Work?

Today’s slow cookers are electric vessels with stoneware inserts and can cook foods at either low or high temperatures for up to 12 hours. Heat rises from the bottom and is trapped in order to cook food over a long period. Although it’s tempting to remove the lid to check on progress, each time you lift the lid, heat escapes, prolonging the cooking time. 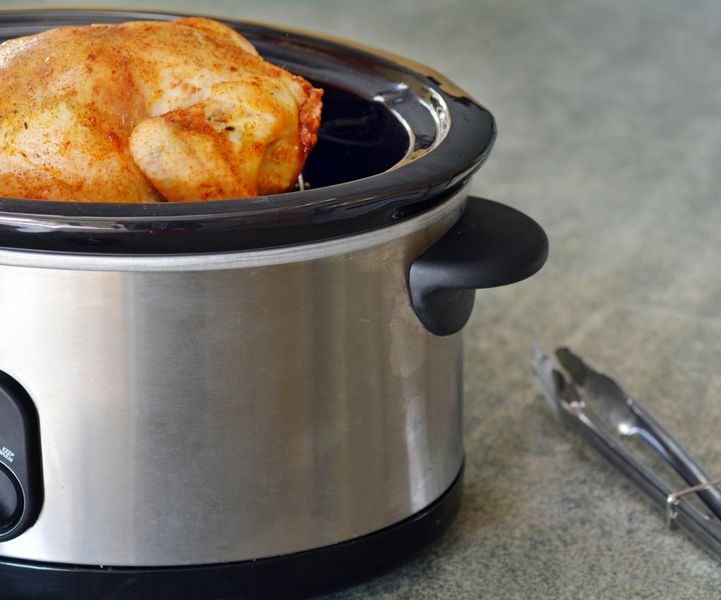 Cooking times must be adjusted when converting recipes to prepare in a slow cooker. Generally, meats, roasts, and stews will take anywhere from 6 to 10 hours, while side dishes, dips, and dessert usually take between 4-6 hours.

To convert cooking times from a traditional recipe, apply the following guidelines:

Note: To ensure food safety, insert a meat thermometer or instant-read thermometer into the thickest part of the cooked food, keeping away from the bone to ensure correct reading. 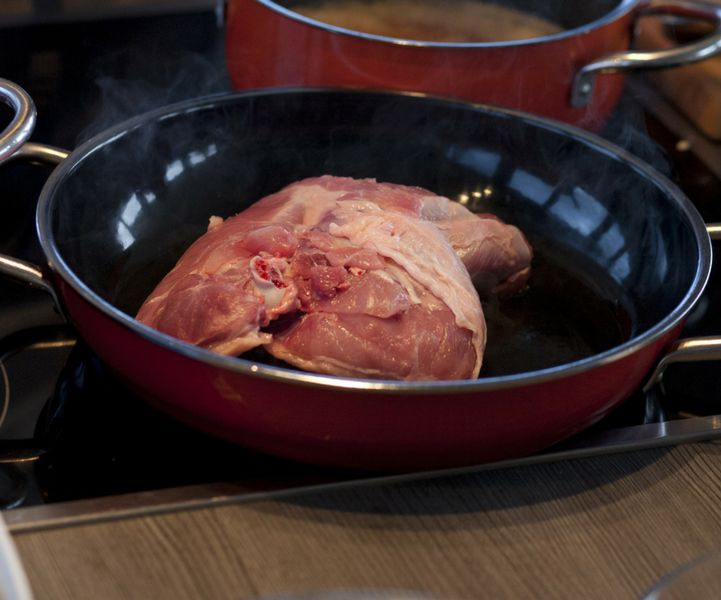 Choose fattier cuts. The slow cooking process is ideal for tougher and fattier cuts of meat, which become tender with moist, low heat.

Layer food. If using root vegetables like potatoes, place on the bottom of the slow cooker with meat on top.

Sear meats and poultry first. Browning in a pan before adding to the slow cooker adds another dimension of flavor as the surfaces begins to caramelize in a scorching hot pan. Add a small amount of olive or canola oil to a skillet and brown on all sides.

Adjust liquids. Since minimal evaporation occurs in a covered slow cooker, you will need less liquid than compared to stovetop or oven cooking. Soup or sauce aside, half the amount of liquid used in conventional recipes.

Keep cover. A slow cooker works by trapping in heat. Each time you lift the lid, it can take up to 20 minutes to restore the temperature.

Modify seasoning. If you are using fresh herbs, add during the last hour of cooking. You may need to add extra dried herbs or spices. Salt and pepper to taste before serving. If you’re preparing beans, wait to salt until they are almost tender to avoid toughening outer coating.

Avoid frozen ingredients. A slow cooker must reach at least 140 degrees in four hours or less for safety reasons. Adding frozen food slows down this process and increases risk for bacterial growth. If you are using frozen meat or poultry, thaw a day or  two in the refrigerator. You should also thaw frozen vegetables before adding.

Reduce amount of wine or alcohol used. Since slow cooking involved cooking in a sealed vessel, alcohol does not evaporate as it would in a regular pot. 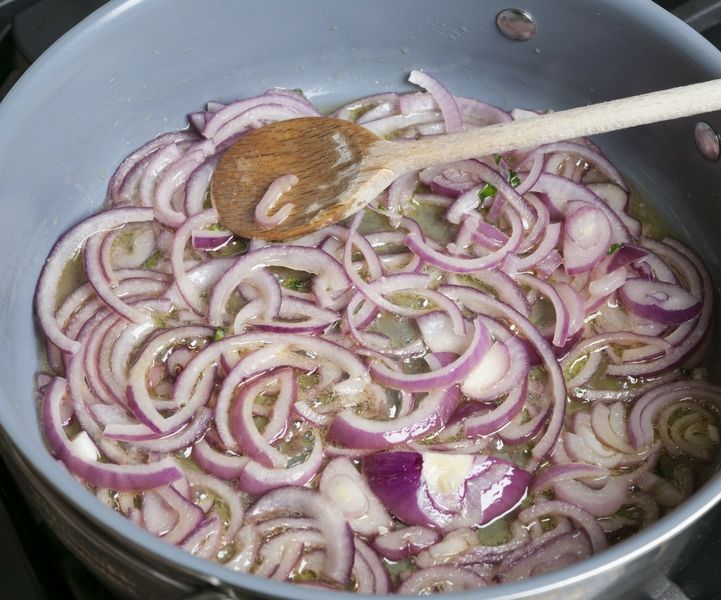 Notes for This Recipe:

1. Slice onions thinly and sauté the onions for a few minutes in a tablespoon of butter to build flavor before adding to the slow cooker.

2. Pat surface of roast and sprinkle generously with salt and pepper.

3. Use a large stainless steel or cast iron skillet to retain heat and avoid overcrowding in pan.

4. Mix butter with oil to prevent burning since oil has a higher smoke point. Milk solids from butter will burn at the high heat needed to sear and adding oil will prevent that.

5. Allow meat to sear for 3 to 4 minutes per side before transferring to the slow cooker. 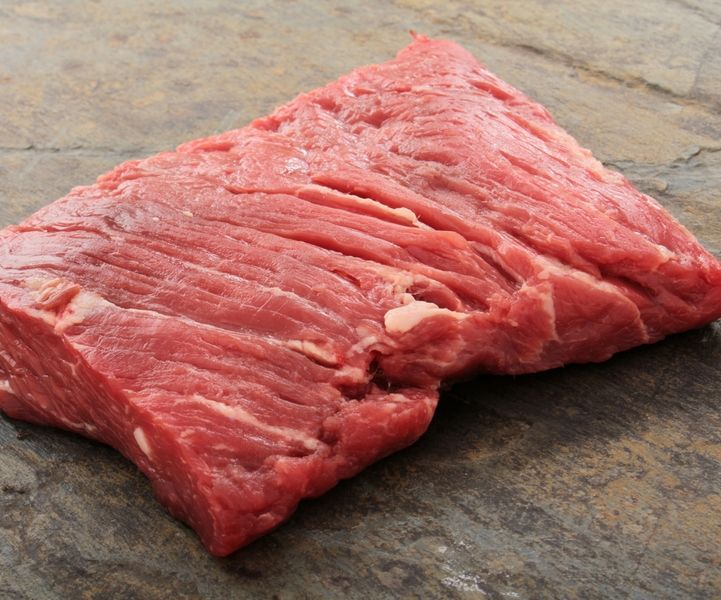 a splash of oil

1. Pat down chuck roast and season generously with salt and pepper on all sides. Heat a large skillet over medium-high heat. If you’re making the pot roast in the oven, you can do this directly in the dutch oven. Add the butter and a splash of oil. When the butter melts, and starts to crackle, add the chuck roast to the skillet and sear on all sides for about 2-3 minutes per side. Set aside.

OPTIONAL: Add a little more oil to the pan and sauté the onions for 3-4 minutes.

2. Add half the onions to the slow cooker, followed by all the garlic, beef broth, Worcestershire sauce, apple cider vinegar, onion powder, dried thyme, bay leaf, celery seeds, sugar, and the chuck roast. Top with the other half of the onions. Allow the roast to cook on the low setting for 6-8 hours or more. 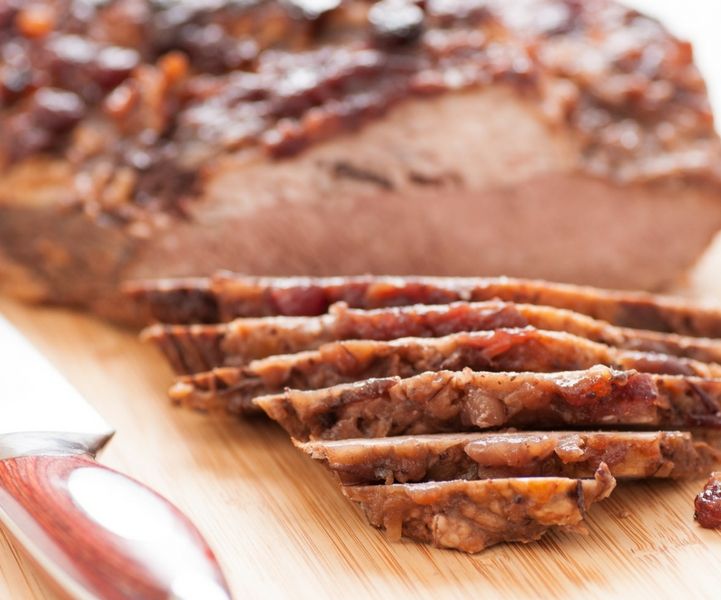 Brisket, which appears in Eastern European Jewish cooking, cured with spices and salt and simmered as corned beef, smoked as pastrami, or in Texas barbecue, is cut from the breast section below the first five ribs.The point cut is more marbled with fat than the flat cut and is best for shredding. The flat cut has a layer of fat and is usually rectangular or square.

Because the cut contains connective tissue, it’s tough and requires slow cooking to break down. Brisket should be seared and then braised until tender. The meat is composed of long strands and is best slices against the grain.

In contrast, pot roast is a cooking method in which a large cut of meat is browned and slow-cooked, covered, with seasonings and liquid such as stock, wine, or water until tender, essentially a braise at low temperature for a long period of time. The collagen in the tough cut breaks down into gelatin, which tenderizes the meat and adds richness to the sauce.

Braising is a classic cooking method in which meat is usually seared to brown the surface by the Maillard reaction between amino acids in protein and reducing of sugars. Following the browning, meat is finished in a covered pot at a low temperature with some liquid.

Generally used for tough cuts of meat, braising works through the application of heat, time, and moisture to break down collagen or connective tissue binding muscle tissue. A classic braise uses a whole cut of meat and braising liquid such as tomatoes, beer, wine, balsamic vinegar, to cover â…” of the pan, adjusted downward for a slow cooker.

When braising vegetables or other foods with high water content, additional liquid may not be necessary. The benefits of braising include one-pot cooking for convenience, a rich sauce due to the breakdown of collagen into gelatin, and the ability to tenderize more economical cuts of meat. 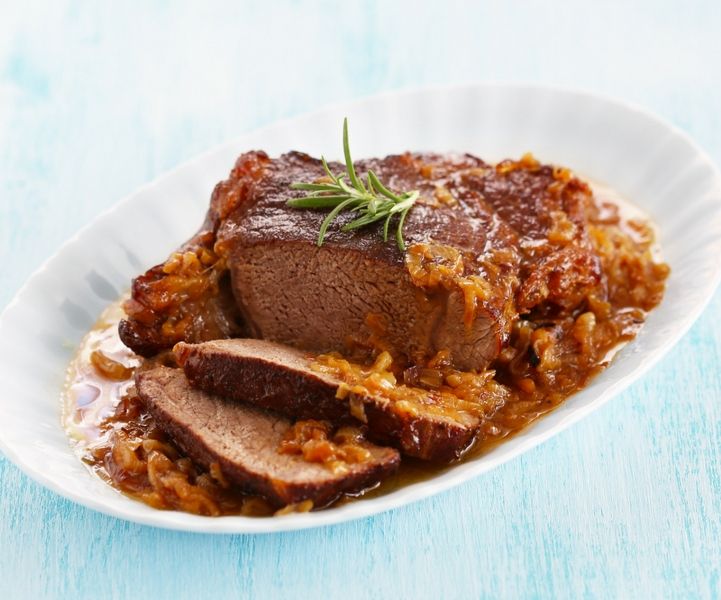 1. Do not remove fat before cooking. Fat adds a rich taste and texture to the prepared dish. Trim fat and skim sauce from cooked meat.

2. Remember that brisket shrinks by almost half when cooked. Buy extra. Leftovers can be frozen and can be used for sandwiches.

Place in slow cooker or pan fat side up.

Trim fat from meat and let cool before slicing. Cut across the grain for tender slices. Skim fat from refrigerated sauce.

Prepare 2 to 3 days in advance to set flavors.Bring to room temperature before wrapping and refrigerating.

Read Next >>> The Ultimate Guide to the Ketogenic Diet